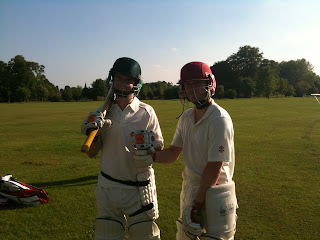 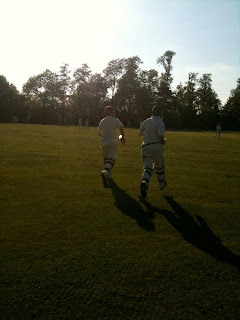 I'm still pretty terrible, but I've been really enjoying competing in a sport for the first time since youth soccer, approximately 20 years ago. All five of the HumGen boys were selected for our second match last week, so a bunch of other people in our department turned out to watch, since the home pitch is on the Sanger grounds (founding director and Nobel laureate Sir John Sulston insisted that the institute should have a pitch on site). In order to give the spectators a show, but to the detriment of our team's chances, Carl and I (pictured above) opened the batting.
I was super nervous as I stood in to face the first bowler, but after a couple of prods which rolled straight to the fielder at short mid-wicket I managed to slap a shot forward of square leg to the boundary (which scores four runs). Because it's a limited over game and since Carl and I weren't exactly racking up runs after the first couple of overs, I started slashing at pretty much everything and edged it to the keeper during my second over.
We managed to set a pretty decent total (149) after our 20 overs, so we took the field and put the game in the hands of our string of decent bowlers including two (Tejas and James) from the HumGen crowd. I spent most of our fielding innings in the doldrums of deep square leg and deep point, but did make a couple of decent plays at long stop. Carl made the catch of the game playing in cover, and our boys generally took wickets at a good pace. The opponents had only racked up about 100 runs with three overs to go, so our captain handed me the ball to bowl an over. My first two balls were nervously wide, but I settled in and managed to get through it while only yielding a few runs (bear in mind I was facing the very tail end of their batting order).
Anyway, it was awesome, and last night should've been my second appearance, but was rained out. More updates soon!
Posted at 17:31

I almost understood everything you said.

However, as I will be in the UK in a few weeks, I should figure out if it's at all possible to see you play while I'm there.

In a class last semester about disorders of spoken and written language, my professor used a passage describing cricket to illustrate the point that while we may be able to physically read each individual word in a paragraph, we still may not be able to understand what it's actually saying.