If you can't handle the heat...

...move to somewhere even colder than Britain, apparently. We're having a "heat wave" this week, which consists of temperatures in the low 30's (high 80's fahrenheit) and requires health alerts from the BBC and results in dangerous levels of whingeing by locals about it being too hot.
It's grey and rainy all year people! Enjoy yourselves!
Posted at 07:07 2 comments:

I realized that I haven't actually said much about my new iPhone, other than that long, boring rant about getting it set up. In brief, it's awesome. I didn't upgrade from the first gen to the 3G, so I'm pretty stoked about getting the huge speed bump in over-the-air data speed, in addition to all the other awesomeness of the new model.
Its awesomeness was demonstrated today during my morning of audiophilia. Those who know me well will be aware of my atrocious sense of direction. My old iPhone could show maps anywhere I went, and make an educated guess about my location, but the new one instantly pops up about a 10 foot circle (via GPS) and orients the map to the direction I'm facing (via the built-in compass). Money.
Posted at 14:42 5 comments:

Some dude has a post about how password masking in webforms (showing only asterisks or bullets in the password field, rather than what you're typing) is a relic of early browsers and should be discarded in favor of cleartext password boxes. The claim is that not being able to see what you're typing makes it hard to notice typos and contributes to a bad user experience.
I think the point is interesting, but the suggestion freaks me out. It's true that people frequently use bad design for no reason other than convention, and I agree that over-the-shoulder password stealing is a mostly imaginary threat. Nonetheless, I have a built-in reaction to seeing my password in cleartext that's similar to walking outside naked. This is a string that we've typed millions of times, but never actually seen appear onscreen! Whenever I accidentally see my password (typing in the wrong field, typing before an ssh connection has returned with the prompt, etc) I get the urge to cover up as quickly as possible, even if I'm sitting in my office by myself!
Posted at 10:53 3 comments:

iPhone 3GS, and props to O2

Many of you will know that in addition to being a general Apple fanboy, I'm an iPhone addict. I've had a first-gen UK iPhone since they launched here in 2007, but I resisted the impulse to pay the early-upgrade fee last year to get an iPhone 3G. Of course, I've been jealous of all those late adopters who had a shinier gizmo than me ever since!
This month's launch of the new iPhone 3GS gave me the chance to get back to the front of the line (literally, see below) of Apple gadgets. My original 18 month contract had lapsed, so I was eligible to upgrade to the new phone with a new contract. I booked a "personal shopper" appointment for 8AM on launch day, last Friday, June 19. I arrived at the Apple Store just before 8, giving me enough time to convince the nearby Starbucks to serve me 5 minutes early (seriously, a Starbucks that doesn't open until 8?! but that's a rant for another day) so I could have a hot beverage while I made my purchase. There was a modest line, but my pre-booked appointment let me skip to the front and be one of the first buyers in Cambridge.
In retrospect I should've just bought it at an O2 store, because the actual selling of the phone (where Apple store employees have expertise) is trivial, whereas the setting up of the account (O2's domain) is annoyingly complex. I would've thought I'd be an easy test-case, since I already had an account and was eligible for an upgrade. Not so: the straightjacket O2 registration page required a credit check on me, despite the fact that I've been a loyal customer for nearly two years. This would've been easy, except it requires the Apple store employee to call O2, where he got a girl on her first day (nice planning, O2). This took a while, but eventually was OK'd.
The next step is where the real problem struck. Somehow, instead of upgrading me, the Apple guy signed me up to a new contract with an additional phone number. Admittedly the O2 interface he was using was confusing, but I think it was at least half his fault for not carefully reading the instructions (e.g. he kept getting an error message on how many digits an IMEI should have, and kept putting in different things, never actually matching the requested number of digits). He told me the new phone would be activated with my old SIM and number, and I should ignore the fact that I was signing a contract with another phone number and SIM printed on it. I said three times that this didn't feel right, and he reassured me and spoke to a manager, who reassured him, that this was how it should work. By that point I just wanted the phone, so I caved and signed the new contract.
Once at home, much to my surprise, I popped the old SIM in the new phone, plugged it into my computer, and it magically worked: correct phone number, all data synced from my laptop. Brilliant. When I logged on to my O2 account page, however, I discovered that I now had two lines registered to me — exactly what I had dreaded. I had other things to do, so I left it for the time being, hoping that it might sort itself out. On Saturday I received an email billing me for my new account, which promptly killed that hope.
At this point I was convinced this would be a hugely annoying problem to fix, and that I'd be wrangling with O2 for days to get things right. I settled in with a big cup of coffee on Sunday morning to phone them up, expecting to be there all day. My first attempt looked promising, as I got bounced from Customer Service to iPhone service to somebody else, all giving me the impression that my problem would be possible to fix. Then the line went dead.
Great.
So I gave them a few minutes in the vain hope they might call back, and then called customer service again, expecting to have to be bounced along the same path to someone who might be able to help. Imagine my surprise when it became clear that this service rep was both knowledgeable and possessed the appropriate permissions to immediately close down the unwanted new account and put a hold on the bill, with no repercussions or further action from me (this is the land of "computer says no", after all)!
So now I have my awesome new phone, only one bill, and it only involved a minor headache. Cheers to O2!
Posted at 13:48 1 comment:

One of Jenny's friends invited us to watch a polo match yesterday. His photocopy supply company (who are apparently booming in the current economy) runs a "family day" where they have a big barbecue and watch polo. Snippet of video is from my new iPhone 3GS (more soon). The quality is actually remarkable at full frame, but I had to crop this way down to avoid it being just a video of an enormous field with 8 tiny ponies running around.
Posted at 15:24 No comments:

Return of the rabbit

Our friend came back, and Jenny snapped a photo of him enjoying our flower bed: 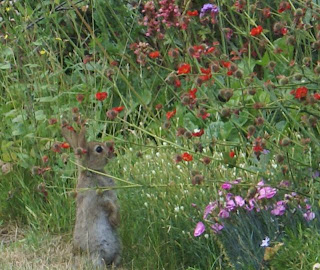 On defrauding the public, and then beating them up.

It's been interesting to watch events after the Iranian presidential election unfold over the last couple of days. A variety of (mostly Western) sources have claimed that Ahmadinejad could not plausibly have won in the 63% landslide specified in the official results. There is, of course, disagreement about how unlikely this result is, with some excellent commentary at the always reliable 538.com.
What I find more interesting, however, is how difficult it is for a regime to walk the fine line between falsifying elections in a remotely believable way vs. the more outrageous Saddam Hussein-style victory by 94%. I'm leaning toward some wide-scale fraud, supported mostly by the strange circumstances surrounding the third- and fourth-placed candidates who saw a ten-fold decrease in voter share, losing even their hometowns by enormous margins.
If this is true, then it illustrates how difficult it is for dictators in the 21st century to impose their rule by fiat, but keep a straight face about "free and fair" elections at the UN water cooler. I also find it strange that the powers that be, after rigging the election in a vaguely plausible way, have resorted to blocking the internet, disabling text messaging, and generally beating the shit out of anyone who disagrees with the party line.
Posted at 17:15 No comments:

I just watched the first DVD of season 2 of 30 Rock, which was only released in the UK relatively recently. The first season was excellent, and I had been looking forward to the second for a couple of months. So far (8 episodes in), this season is even better than the first, with awesome cameos from Jerry Seinfeld, Al Gore and James Carville. I also get the sense that it must be an industry favorite, as they've had Carrie Fisher, David Schwimmer and Edie Falco as guest stars.
If you aren't watching it, you should be.
Posted at 22:15 No comments: