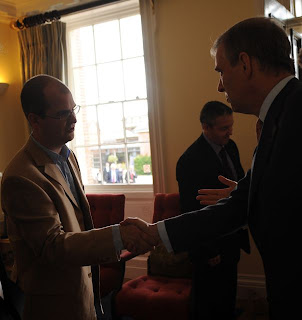 His Royal Highness, the Prince Andrew, Duke of York, came to visit the Sanger campus last week. He had previously developed an interest in the Institute when discussing it (among other things) at a meeting with our principal funder, the Wellcome Trust.
After arriving by helicopter he met with a variety of people, including an unscheduled detour to the cafeteria to say hello to people having lunch. His last agenda item was a "working lunch" with some of the young faculty, including yours truly. Pictured at left (courtesy of the WT photographer) is me being introduced (that's Sanger director Allan Bradley's ghost hand behind the Prince).
The Prince (Charles's younger brother for those who don't carefully follow the Royal Family) was very engaged and seemed legitimately interested in our scientific work. He's obviously a smart guy, and well practiced at conversing intelligently with experts on nearly any topic.
Posted at 17:37

Did you address him as milord? Or miliege?

Listen up colonials: technically correct would be "Your Royal Highness" not "your royal highness".

I'm glad to see that despite having goofified your accent and mangled your vocabulary and spelling, those monarch-loving limeys* haven't corrupted your principles of liberal government.

Although do I detect a bow in that inclination of your head...? You must be a secret monarchist! And probably an Anglican to boot!

The question must be asked: Does he have a decent hand shake or is it more like a royal wet fish?